With an enrollment of more than 27,000 students, the University of New Mexico is the state’s largest college.  It’s known for its strong and historied athletic programs, particularly the Lobos football and basketball teams, which compete in the Mountain West Conference.

Dreamstyle Stadium has been home to the Lobos football team for 60 seasons.  The 39,224 seat football stadium is attached to the L.F. Tow Diehm Athletic Facility.  Tow Diehm, who’s known as the “Father of Athletic Training” in New Mexico, served as UNM’s athletics trainer for 31 years.

Inside, the facility includes athletic offices, common areas, locker rooms for both home and visiting teams, and a weight room that underwent an $800,000 renovation in 2014.

These problems inevitably surfaced at the worst times, like game day.  The system provides hot water to all fixtures within the building, including the home and visitor locker room showers.

“We were frequently called in after hours to tend to the old system,” explained Richard Van Damme, HVAC master for the University of New Mexico.  “At one point, we had even drained the 1,600 gallon storage tank for replacement, only to fill it again a few days later for game.”

Hot water was being supplied by two large, atmospheric volume water heaters with capacities of 490,000 BTUH each.  The maintenance department had been pushing for replacement for a number of years.  The cost of maintenance was rising, outright failure was imminent, the system’s dependability was lacking and efficiency was a concern.

“When we received a work order to replace the failing system, we evaluated a straight, in-kind replacement with standard efficiency water heaters.  Installing a similar storage tank would’ve required removing part of the roof.  We also looked at tankless style system options.  Energy savings was a big consideration, as was redundancy and serviceability,” said Jesse Hart, facilities engineer for UNM’s facilities management department.”

“There are short periods of high demand, with low or no demand otherwise,” he continued.  “The showers aren’t even used year-round, so the application lent itself perfectly to a hi-efficiency, low-volume hot water system.  Standby heat loss from the big tank was significant.”

UNM looked at various tankless products and contacted their local Navien representative, Jordan Mahboub, at RepNet.  Mahboub and Hart worked closely with Navien sales engineers to create a design based on the peak hot water demand at the L.F. Tow Diehm Athletic Facility: 82 gallons per minute at 120F.  The university wanted the ability to meet peak demand with one or two units offline.

Once the design was approved, Futures Mechanical was hired for the replacement.  The volume water heaters and storage tank were removed and 18 Navien NPE-240S condensing, tankless water heaters were installed.

The NPE-240S is a 199,900 BTUH condensing, wall-hung water heater that features dual stainless steel heat exchangers, a 10-to-1 turndown ratio, and efficiencies up to 97 percent.  The unit also provides LEED points, where applicable.

Water heaters were installed in two independent systems, one on either side of the mechanical room to serve each locker room.  Navien’s Ready-Link manifold system was used to simplify the installation and save space.

The Ready-Link Manifold System provides everything required for a multi-unit installation, including manifolds for water and gas, racks for floor mounting, valves, connections and flex lines.

Up to 16 NPE-240 units can be common vented, so only four roof penetrations were needed at the athletic facility.

“No intricate programming was needed to cascade this many units in a single system,” said Van Damme.  “By using the factory-supplied cascade cable, the logic built into the units does all the thinking.  If for some reason the master unit goes down, the next unit in line takes over, so there’s no downtime in the event of a unit failure.”

“Having Jordan Mahboub here during commissioning helped us learn all the advantages of the Navien system,” Van Damme continued.  For example, each rack requires a single gas regulator, not every unit.  The manifold system lets us isolate any unit in the group for service without taking the others off-line.”

When the new system was tested, every hot water fixture in the facility was opened for almost two hours.   The units cascaded to meet demand, but never fired to 100%.  According to Van Damme, full capacity was met and sustained while the systems are operating at 60% input.

“The modulating component was a feature we really wanted,” Hart said.  “Each of these units provides a 10-to-1 turndown, so no matter if there’s one sink or 20 showers running, we can accurately match the load.  We’re not using energy beyond what’s needed to meet the actual demand.  Now that the system has been operational for over a year, we’ve found an annual natural gas savings of 2,282 Therms.”

The entire project took three months over the 2018 summer break.  The installation was seamless, and was completed just in time for football season.  There’s now more space to service the water heaters or work on other equipment within the room.

“I think this system is a great asset to the stadium,” Van Damme said.  “The money saved on maintenance alone is significant.  We’ve been so impressed with these units that we’ve decided to use Navien systems in other locations across campus.” 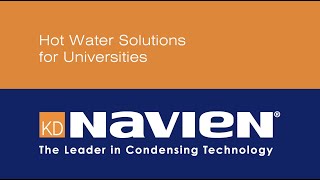 University of New Mexico Upgrades Athletic Facility To Navien Tankless Water Heater System
You accept the use of cookies as described in our Privacy Policy by clicking 'OK'.