BURMUDA DUNES, CA — Louis Dombrowski is a second-generation boiler contractor who has been running his own company, Crossfire Mechanical (www.crossfirecorp.com), since 2014. “We’re a C4 licensed boiler contractor, so we specialize in hot water and steam,” Dombrowski says. “We’ve geared our entire operation to just doing commercial boiler work.” That means very little residential and no new construction work. The company has a service area that covers Orange, San Diego, Riverside and parts of LA counties.

But now Crossfire is in the unique position of being a boiler company that does not install boilers. All their work now is done with tankless water heaters—exclusively Navien, and mainly the model NPE-240A.

“Since we’ve been doing the Naviens we’ve stopped doing boilers,” Dombrowski says. “It’s been an amazing experience. It’s very rewarding and its awesome because we’re really the only guys doing it. It’s changing our industry.” 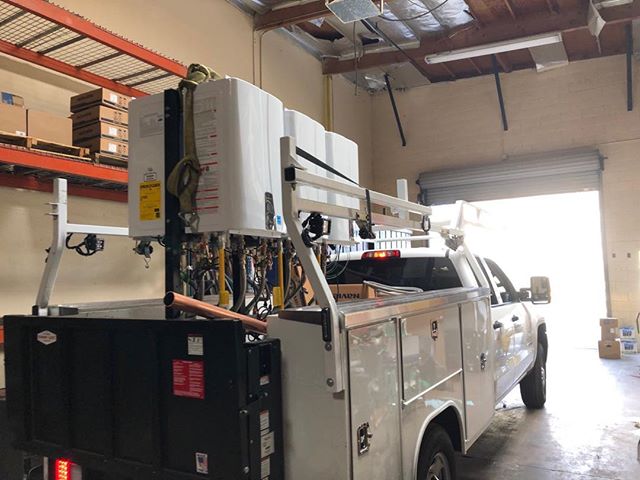 “One thing my dad taught me growing up was, everybody needs hot water, and when it comes to a business that has to have hot water, that’s even more so,” Dombrowski says. His clients include major hotel chains, apartment complexes, country clubs and many more. Crossfire is on the speed-dial for customers throughout the region, and the company gets emergency calls every week.

Out at its Burmuda Dunes, CA headquarters, a two-and-a-half-acre property, Crossfire has a 5,000 sq. ft. warehouse and prefab facility. Using Navien’s proprietary racking system the company racks units together (normally at least six to a rack), all linked, pre-plumbed, with all gas and electrical connections ready for installation. Crossfire can meet the capacity required for almost any application, just by adding more tankless units. Then they forklift the assembly onto a truck for delivery to the site where it can be set (or craned, if need be) into place.

“It’s cut our install times way down,” Dombrowski says. “The fastest we’ve ever done an install is about three hours. We’re talking about 1.2 Mbtus… we’re doing installs quickly, on a moment’s notice. We’re the only guys doing that, and it has really set us apart from everyone else that we can offer this turnaround time, because in emergencies, people need it NOW.”

Even more remarkable is the fact that Crossfire is doing this with a crew of only five or six technicians. “We keep it small on purpose,” Dombrowski explains. “The less overhead we have, the smaller crew we have, ultimately it turns out to be cost savings for our customers… but we don’t need a huge crew to do Navien installs. We can do almost any size install with very minimal people. That’s another great thing about the Naviens: once you’ve got the recipe down you just keep cooking.”

In moving to his new business model, Dombrowski met with some resistance from customers who didn’t have confidence in tankless technology for one reason or another. He has plenty of his own work to show as a counter-example.

“I have these Navien units on lots of sites and they’ve been up five-six years without problems,” Dombrowski says. “We’ve been putting these units to the test. I’ve had them on some properties without water filtration, not doing maintenance on purpose because I want to see what these things are capable of, and they’ve been workhorses.” If that’s not enough to convince people, when it comes to tankless installs Crossfire can offer an eight-year heat exchanger warranty and a five-year parts warranty.

Another selling point is the money to be saved. The Navien NPE-240A can deliver up to 97 percent efficiency, compared to about 84 percent for the typical commercial boiler. That efficiency actually allows for further cost savings through rebates from the local gas utility.

And a huge factor for any commercial building manager considering a replacement—perhaps an emergency replacement—is system redundancy. Because the units are linked together, one or even two can fail and the system can still deliver sufficient capacity to keep guests or residents satisfied while repairs are being made.

“We’ve never had a disappointed customer,” Dombrowski says. “We’ve actually surprised a lot of people… we tell people what we can do for them and they don’t believe it, and then we do it and they’re amazed. We did [a large hotel installation] with the crane lift… we’re running 350 rooms on 16 units and they’re saying they’ve only ever seen seven units running at once, they’ve never called for all 16 to run. Which is just amazing. Because the turndown ratio that we’re getting out of the units is unbelievable.” 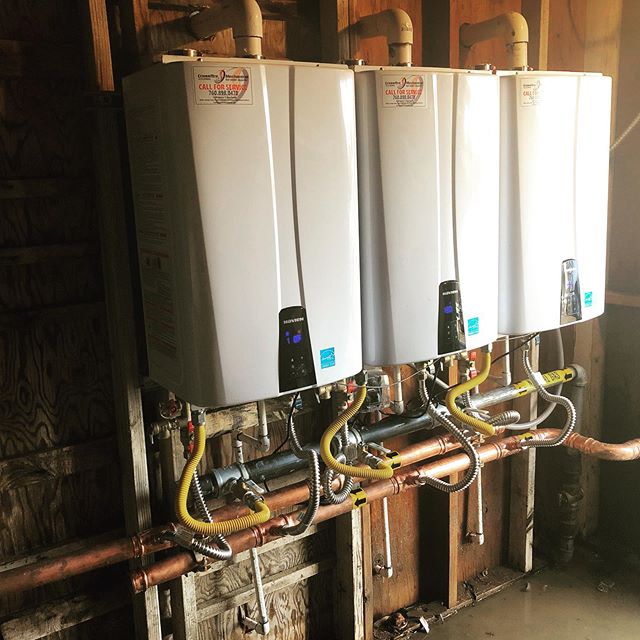 Putting Themselves Out of a Job?

In addition to being reliable, the Navien tankless water heaters are also easier to service and maintain than typical commercial boilers thanks to features like stainless steel heat exchangers and modular design. They are also available with the company’s NaviLink system that gives facility managers control from any Wi-Fi enabled device and can instantly alert them to any problems or system failures.

“One other thing that’s really nice about Navien,” Dombrowski says, “after we install them at a hotel or anything, Navien has a training facility out in Irvine, CA, and they will train up the engineering crew. They get certified and can now work the system themselves. We’re giving the customers more control of their house, basically, so they can do the work in-house if need be.”

The combination of dependability and ease-of-service actually has Dombrowski a little worried about the future. While Crossfire has no shortage of work just now, he is already looking ahead of time when a majority of commercial customers in his service area have already made the switch to tankless and the replace/retrofit market dries up.

“Basically, we’re installing ourselves out of a job,” Dombrowski says, “which is pretty crazy. But it’s the right thing to do. It’s a good product, and it’s a product we can stand behind.”